Back in 2010 I started a project for uni called DroppedBoxx, it was a dropbox client for Windows Mobile 6.5.

This app got me starting to develop mobile apps and sparked my interest for working with web APIs (especially Dropbox as it spawned the DropNet library). It began as a free download during its beta period to get feedback for it while I was developing it for uni and later was sold for about $1 on various stores but it is no longer available and since I no longer have a Windows Mobile 6.5 device I lost interest.

No updates for almost a year :(

So I have now decided to open source it! 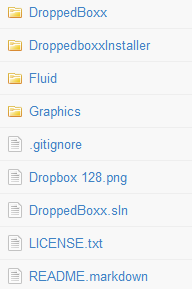 I have put the source up on Github for anyone to fork, as well as the latest .cab installer. https://github.com/dkarzon/DroppedBoxx

The source code is actually made up of a few different components.

I must give credit to Fluid .NET controls, DroppedBoxx has a slightly customised version of the library in it.

I should also give credit to RestSharp for which a lot of the http request handling was based off (modified to work with .NET Compact Framework)